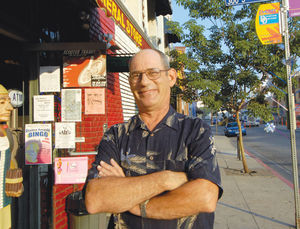 Known for his bellowing “Whaddaya want?” and a soft-hearted bark worse than his bite, Joel Bloom is the pioneering community activist who helped shape the Arts District in Downtown Los Angeles and was recognized as its unofficial mayor with his shoebox-sized general store serving as the neighborhood’s town hall during 1994-2007.

Bloom, who also was a playwright and actor, died July 13, 2007 of soft-tissue sarcoma at West Los Angeles VA Medical Center after fighting cancer since 2000.

“He gave the Downtown Arts District its personality, and he was unabashed in his great love for it,” said City of Los Angeles Councilwoman Jan Perry, who represented the area sandwiched between Little Tokyo and the banks of the Los Angeles River during 2001-2012. “Joel was charismatic and ruled the roost over there for many, many years.”

In late June 2007, the City of Los Angeles gave him an honor rarely accorded a living Angeleno—a sign was posted at East 3rd Street and Traction Avenue that declared the area “Joel Bloom Square.” The humble Bloom’s General Store, founded in 1994 to give the growing community a place to pick up toothpaste or rent a video, stands nearby.

“There’s a spark here—hopefully we can light it,” Bloom told the Los Angeles Times in 1994 before opening the store in the industrial corridor.

The Arts District began in the late 1970s as a haven for artists who worked in the lofts and often illegally lived in them. By the time Bloom moved there in 1986, the city had legalized the live-work spaces, and hundreds of artists had flocked to the area then known as the Warehouse or Loft District.

“I get a feeling here I haven’t gotten anywhere else. It may look desolate, but it’s not. There’s no place I’d rather be,” Bloom said in 1994.

The resolution also saluted him as a life-long baseball fan and as a member of Chicago’s Second City improv group “who raised the term ‘grumpiness’ to an art form.” Offstage, he was seen as equally cantankerous.

“He was a very gruff old man,” said Edward Walker, a longtime friend who worked at Bloom’s store. “He could yell at you one moment, but the next he would be your friend. Still, if you needed something, he would be the first one there.”

Bloom reveled in being a character, friends said, and in creating them.

In 1987, Bloom wrote and staged a production in a downtown parking lot that spoofed drive-in movies. Patrons were handed 2-D glasses—the wearer could see out of the left lens but not the right—and watched Mayhem at the Mayfield Mall, a parody of sci- fi movies.

When the play was restaged in 1998, The Times reported, the Drive-In Drama lot on Imperial Street was thought to be the only venue where live theater could be enjoyed from the comfort of an automobile. Audience members honked to signal laughs or boos, and the national media tweaked L.A. for re-defining ‘‘car culture.’’

A Bloom musical, Showdown at Sonoratown: The Lady Who Stole Hollywood, satirized Los Angeles history when the play was performed in 1990 on Hewitt Street at Al’s Bar, which turned into Al’s National Theater on slow nights.

As an actor, Bloom appeared in plays such as The Juke Box Never Plays the Songs You Want to Hear, a takeoff on A Mid-Summer Night’s Dream in which the audience sat on stage and the action unfolded on the floor of Al’s, said TK Nagano, Bloom’s bookkeeper and friend.

Away from the stage, Bloom burnished his reputation as “the godfather” of the community of 1,500 by helping to spearhead a campaign that resulted in the city officially designating it in the 1990s as the “Downtown Arts District,” Walker said.

Bloom also led the successful fight to keep the Los Angeles Unified School District from building a distribution warehouse in the neighborhood. In 2000, the Southern California Institute of Architecture (SCI-Arc) moved into the area instead.

“Without Joel, we wouldn’t have an arts district in its present form,” Walker said. “It’s kind of a Mayberry filled with bohemian artists. Everyone knows everybody, and everyone knows Joel.”

The second of three children, Joel Alan Bloom was born May 30, 1948, in Chicago. His father worked for a paper company. In 1969, he graduated from Pasadena Playhouse’s school of theater arts. During the Vietnam War, Bloom served in the Air Force, documenting the daily life of soldiers on film and from the air. After leaving the service in 1974, he earned a degree in psychology from the University of Illinois, then joined Second City as a stage manager in Chicago.

In the late 1970s, he moved to Los Angeles along with Second City comedian George Wendt, with whom he roomed in Chicago. Bloom bartended at Al’s, joined Shakespeare Festival/LA as stage manager and put down roots in what would become the Arts District.

“We’ve always been dismissed as that industrial area east of downtown,” Bloom told The Times in 1997. “Well, we’re more than that. There’s a heart here. And a soul.”

The corner of Traction Avenue and Hewitt Street came to be known as the heart of the community, the site of a scruffy general store where Bloom was known to greet customers by bellowing, “Whaddaya want?”

Bloom had been divorced since 1977. In addition to his son, Randy, of Azusa, his family members included a brother, Michael; a sister, Lynn; and two grandchildren.